Forty-eight years ago, in February 1973, seven people from two dismantled groups in Newton, Kan., rented a van and traveled to Evanston, Ill., to attend a conference hosted by Reba Place Fellowship for people interested in intentional community. As a result, these seven formed New Creation Fellowship (NCF) as an intentional Christian community.

By April they had established a common treasury, decided to locate in a certain neighborhood in Newton and purchased a house there. By October they were holding Sunday morning worship services in the living room of that house. A month earlier, in September, NCF joined Western District Conference.

In the next few years, the fellowship formed small groups and welcomed new members. Decision-making was done using a consensus model.

More people came, and the fellowship bought more houses for the extended households that had formed. These included multiple family units and single adults. In 1980, NCF joined the General Conference Mennonite Church.

A crisis arrived in 1981, when the IRS began auditing members of the common treasury. During a years-long process I’ve described as Kafkaesque, the IRS discounted donations to the church corporation by common treasury members, and those members had to pay back taxes with an additional interest payment of around 20 percent. The fellowship then sold houses to help pay these, while receiving help from sister community Reba Place, which was organized the same way but escaped IRS scrutiny.

From its beginning until 1986, NCFC held worship services in a house. In 1986, it began meeting at the Northview Development Center dining hall. In 1989, the church began worshiping at Sister Frieda Chapel, renting the facility. In 1991, the church purchased the building from Newton Medical Center. That building remains NCFC’s meetingplace, although since March 22, 2020, the congregation has produced its worship services online and met remotely.

From its beginning, NCFC has followed a shared-leadership model. “Elders” provided oversight, and various people gave sermons at worship. In 1980, Steve Schmidt was ordained and eventually served as lead pastor. In 1996, Wes Bergen was added as a quarter-time teaching pastor. In 2001, Schmidt left to take a pastoral position in La Junta, Colo. Stan Bohn served as interim pastor for one year, then Ruth Penner served as pastor from 2002-2008. Renee Kanagy served as pastor from 2008-2015. Jenny Wintermote served one year as leader in faith formation. In 2016, Derrick Ramer became the pastor and continues today.

In its 48 years, NCFC has gone through many changes and seen many people come and go, but all the while its identity as a Mennonite congregation that seeks to worship God and faithfully reflect God’s unconditional love remains.

After the pandemic hit in 2020, New Creation Fellowship Church put up a sharing box and invited people to place boxed or canned food, personal care items, masks or other items someone might find helpful. It receives visitors almost every day. 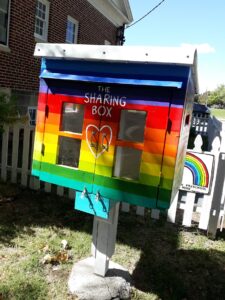